The internationally celebrated pilot depicts an imagined version of what goes on in the inner chambers of the supreme court.

NEW YORK, New York, Friday, Sept. 9, 2022: “The Chambers – In God We Trust” television series’ cast and crew are celebrating another huge week for the series. The show took home 22 awards this week – 11 at the Florence Film Awards, 10 at the Hollywood Gold Awards, and one in London. This brings the political series’ award total up to 32 – and counting. 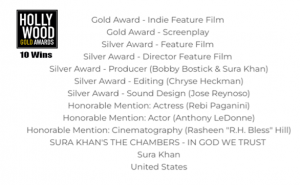 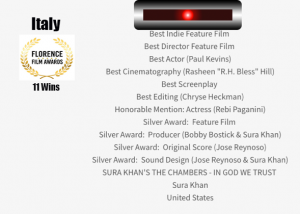 The pilot starts with the staff tackling a breaking news story that puts Judge Kimble on the cover of the early edition of the news. Kimble’s executive assistant Marsha makes a statement while having dinner on a date with Dan, a gentleman Marsha has seen around the court. Still, she is unaware that he is a reporter for the Daily Justice Newspaper. Marsha makes a statement that puts herself and the Judge at the center of controversy in an already challenging political environment.

“I’m honored that the show continues to make a splash wherever it comes,” said Sura Khan, the show’s creator and director. “I’m looking forward to continuing to tell this story and show it to the public.”

Get the scoop on “The Chambers” in the media kit.

“The Chambers” on the web, Instagram, and TikTok. Watch the trailer here.

Secure an interview with the cast and crew of “The Chambers” by emailing Sara Fruman at sara@soulevolutionmedia.com.